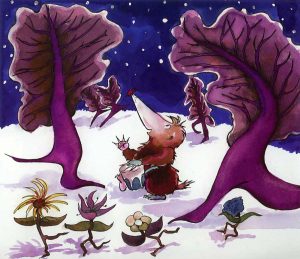 “Deep under the ground lived a little mole named Molito. His fur was brown, the colour of burnt toast. His eyes were yellow as the sun.” Molito is a children’s book about a little mole who loves to play his drum for his friends in the underground park. One day Carlota the ant tells him about a place called the upperworld. Molito decides to go and see for himself. After a series of misadventures, including a ride on the subway, Molito crawls out of the earth and discovers that the upperworld is a magic place full of diamonds in the night sky and trees that dance in the wind. Yet he’s lost in the city until he finds a friend, Violeta, who takes him to the market to meet her friends. When Molito plays his drum, they tell him that he plays the sound of the earth’s heart beating. Discovering that the underworld is simply the inverse of his world, Molito builds a tunnel to connect both worlds. All the creatures from the underground come up to meet the people in the market and play the music of the whole world dancing. “Above and below/ In the dark and the light/ Upside down and upside right/ Below your feet and above your head/ There’s just one world./ There’s just one world.”

This post is by the Black Moss Editorial Team. For more information about our team, go to About Us>Our Team on this site.