A Writer Needs a Desk

If it might be said of a writer, as it would certainly be said of me, a writer needs a desk.  Though writing well rarely if ever comes down to a mere matter of good furniture, from the very beginning of the beginning of my literary aspirations I dreamed a dream of myself seeing myself toiling over a blank page, gripping a pencil in my hand with the sentient movement of my arm held up by the polished grain of well-crafted oak.

Alone in a room, alone in a house, alone on the street, alone in the ideal solitude into which I might vanish as Voltaire once long ago vanished, though his writing table remains in the world as it does on the landing at the top of the stairs at Café Procope, 13 Rue de l”Ancienne Comédie, in the literary environs of Paris. You might visit that time-fractured marble slab and imagine the master’s ghost toiling over the half-written ink-stained pages of Candide, as you might also visit Rousseau’s desk on the same landing in the enlightenment coffeehouse district, at the restaurant favoured by Verlaine, and Hemingway, Joyce and yours truly.  I’ve also been to the house of Emily Dickenson and seen her small scrivenery set at a window overlooking her garden.  I’ve stood in a university museum in Havana where Ernest Hemingway’s stand-up desk is on display.  Hemingway wrote standing after his plane crash in Africa, the pain in his spine too great to allow him to sit comfortably for any length of time. 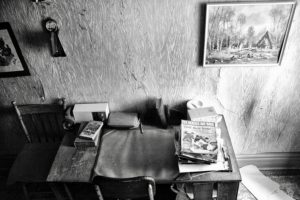 And as for me, my first desk was a homemade affair.  Although I’d begged my farmer father to purchase a desk for me, that request did not bear fruit.  So, I took a scrap of plywood left over from a project at the barn, sawed off two lengths of one-by-one lumber serving as rough-cut legs hammered into place by ten-penny nails, the nail heads still visible on the lacquered surface, and two orange packing crates stood on end, and thereby crudely fashioned my very own first desk.  When the farm sold that desk went to the dump along with a few broken chairs and a set of texts on the lineage of Lincoln sheep in Canada.

Since then, I’ve had four store-bought desks.  The first was a small desk with a three-by-two-foot writing surface made serviceable and sufficient for my crowded little university era room complete with iron cot and three-drawer dresser.  Then I bought a red oak desk that I eventually gave to my elder son when he was of university age.  I built a rather commodious study in one of the several houses I’ve lived in since I first married.  Appropriate to that office, I bought a cherry desk I set at the window overlooking a lotus pond well stocked with koi for the night-raiding raccoons.  I left that desk where it sat when we sold the house, thereby returning to the previous desk retrieved from my son after he departed from home to Korea to begin a job as a teacher of English in Seoul.  Now I write on a wooden writing table with a faux leather inlay sitting at a bay window overlooking my side yard.  This final desk might see me out as I dream of the day some as-of-yet-unborn stranger stands to admire the surface, as I once admired the fractured marble of Voltaire’s writing desk, glancing through the ghostly movement of his nearly invisible shoulder as he writes like dust shafts dancing in the light that comes through the window at the top of the stairs at the Procope café.