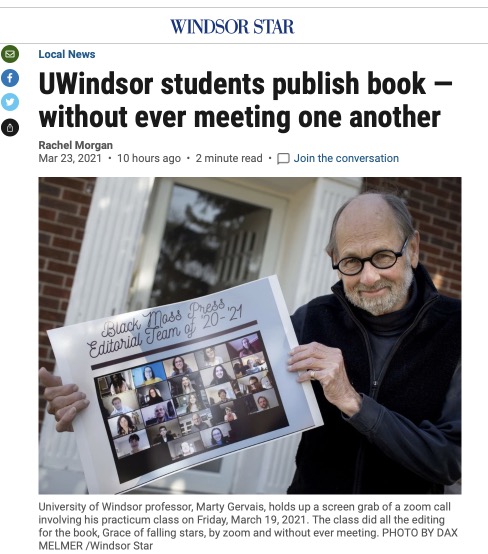 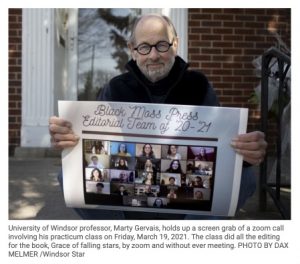 Online school has isolated students around the world from their professors and peers, taking away the social aspect of university.

But students in the editing and publishing practicum at the University of Windsor managed to form friendships and publish a book, Bruce Meyer’s Grace of Falling Stars, all without ever meeting each other.

Marty Gervais, publisher at Black Moss Press, has taught the practicum for 15- plus years. His students become interns at the press and work with an author over the course of eight months to publish a book.

This year’s practicum was completely virtual.

“When I was preparing for this course, normally I wouldn’t be nervous,” Gervais said. “But I had to do this in a completely different format which I had never done before and so how am I going to engage the students?”

What Gervais worried would be a challenge turned into an opportunity. The students met two to four times per week on Zoom. The online platform allowed them to connect with little notice.

For Bryanne Bates-Ewanyshyn, co-master of ceremony for the book launch, it was all about developing a new routine.

“… instead of turning on our cars we pour ourselves a cup of coffee. We come to our desks and we get to work,” she said.

The look of the launch also changed. Aspects such as appetizers and raffles that the interns would usually plan are not doable online. So Bates-Ewanyshyn and Ceglie are innovating by hosting a Facebook Live cocktail hour before the launch.

“It took countless meetings and fostering idea after idea and putting the craziest things out there and then honing it back and seeing what’s realistic,” Bates- Ewanyshyn said.

The interns can’t wait for the launch of the book.

“We’ve been talking about this to everyone in our lives for all these months and being able to hand them the book and say, ‘My name is in this book’. We’ll be able to have that with us forever and show everyone we know,” said Rebekah Voegeli, co-master of ceremony for the book launch. “That’s just the coolest thing ever.”

But the students will not leave the semester with only the book. They’ll also take away friendships, contacts and experience.

Meanwhile, Meyer, who has written more than 60 books, feels the process added something to his work.

“I love the energy, the fresh eyes, the sense of excitement students bring to the process of making a book appear out of a stack of random poems,” he said about his autobiographical coming-of-age story.

The virtual book launch for Grace of Falling Stars is April 7 at 7 p.m. on Zoom, through Eventbrite.